Based on the books by J.R.R. Tolkien and the films by Peter Jackson, The Battle for Middle-earth took players into the world of The Lord of the Rings in the format of a real-time strategy game. Featured in the game are places, characters, monsters, and other features of Middle-earth as depicted by the film trilogy. A campaign mode takes players through the story of The Lord of the Rings, and Skirmish mode allows the player to battle at any Middle-earth location as a selected army against any faction.

This game was preceded after two years by The Battle for Middle-earth II.

In both Campaigns, the battles as well as some character dialogue imitate scenes from Peter Jackson's Lord of the Rings films, such as the onslaughts at Helm's Deep and at Minas Tirith, and the Fellowship's tarrying through Moria.

The factions available in The Battle for Middle-earth are: 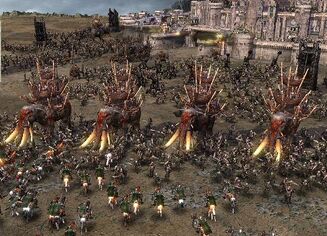 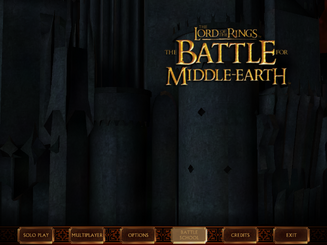 The main menu, displaying Barad-dur close up
Add a photo to this gallery

Retrieved from "https://bfme.fandom.com/wiki/The_Battle_for_Middle-earth?oldid=8282"
Community content is available under CC-BY-SA unless otherwise noted.